Here are video links for Chapters 1-10

Matilda Cook lives with her hardworking mother, grandfather, a veteran of the Revolutionary War, and Eliza, a freed slave who works as their cook, in the apartment on top of their family coffeehouse in Philadelphia. Matilda ("Mattie") Cook is 14 years old with big dreams for her family's coffeehouse. When the yellow fever epidemic breaks out during the summer, people leave the city or die. Matilda realizes she has to fight for her own life and her loved ones.

Her father died in a fall from a ladder. In 1793 yellow fever is spreading through Philadelphia. The people close to Matilda are dying. First, many of her neighbors are infected, then her childhood friends, including Polly, their serving girl, then Matilda's mother. She and her grandfather try to flee to a family friend's home in the country, but they are left behind because of guards patrolling the path. (They kept the sick out of other cities, and thought her grandfather ill because of his cough.) Matilda falls ill with the fever and is taken to a hospital by her grandfather. They return to their house, to discover it was robbed by thieves. The next night, men broke in while Matilda was sleeping. She had screamed, which woke her grandfather up. Grandfather tries to save Mattie, and ends up being killed when he flies back toward the stairs after shooting an old rifle at the thieves.

After this, Matilda is desperate and searches for Eliza, finding Nell, another fever orphan along the way. Finding Eliza, Matilda recuperates with her family for a while. Eliza's two nephews and Nell become infected with yellow fever. Matilda and Eliza take them to the Cook Coffeehouse, but available medicines have little effect. Finally, the first frost arrives, killing the mosquitoes and ending the epidemic. Near the end of the book, Lucille, Matilda's mother, comes back with the President. She is well but needs to take naps and take care of her health. At the end of the book, Matilda decides to take up a new job, as owner of the coffeehouse with Eliza, and life returns to normal in Philadelphia. 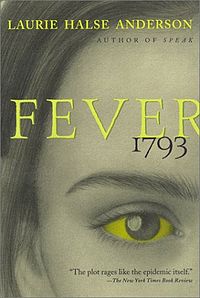 WPVI-TV, 6ABC Philadelphia Presents "Fever - 1793"
----
With a population of approximately 55,000 in 1793, Philadelphia was America's largest city, its capital and its busiest port. The summer of that year was unusually dry and hot. The water levels of streams and wells were dangerously reduced, providing an excellent breeding ground for insects. By July the city's inhabitants were remarking on the extraordinary number of flies and mosquitoes that swarmed around the dock area. That same month, a trickle of refugees escaping political turmoil in the Caribbean Islands became a torrent of thousands as ship after ship unloaded its human cargo on Philadelphia's docks. Unbeknownst to the city's inhabitants, all the necessary ingredients for an unprecedented health disaster were now in place.

With them, the Caribbean refuges brought Yellow Fever. Philadelphia's ravenous mosquitoes provided the perfect vehicle for spreading the disease by first lunching on an infected victim and then biting a healthy one. The first fatalities appeared in July and the numbers grew steadily.

Unaware of the link between the mosquito and the disease's progress, Philadelphia's medical community was dumbfounded. Dr. Benjamin Rush, the city's leading physician and a signer of the Declaration of Independence, advised citizens to flee the city.

A good portion of the population, along with members of Congress, President George Washington and his Cabinet, abandoned the city and moved to Maryland (Now Washington DC). The disease subsided and finally disappeared with the arrival of cold weather in November. It is estimated over 2,000 died.

How a vaccine is made

Yellow Fever: Anatomy of an Epidemic

The Doctors and the Cure